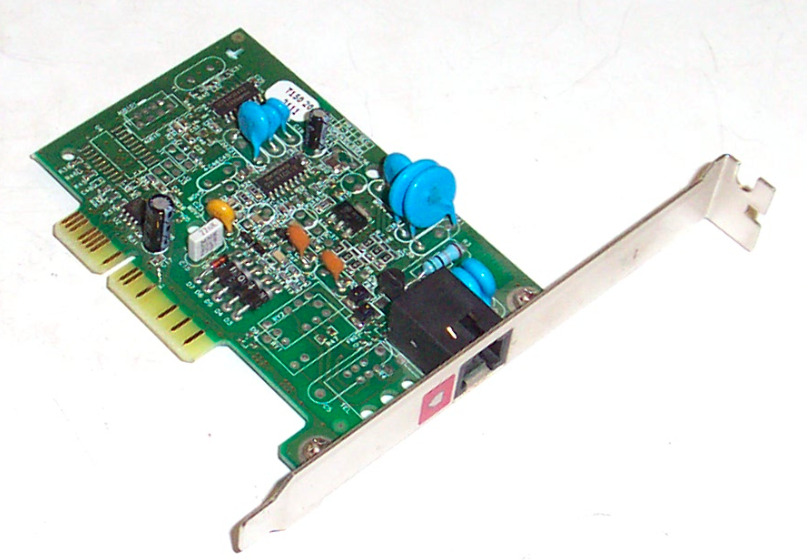 The inclusion of audio and modem capabilities

Providing a narrower opening that was less expensive to produce

An affordable riser card for a modem can be used.

The FCC certification expenses can be reduced by reusing the card on several motherboards.

The AMR has 46 pins, which are divided into two rows of 23 pins each. It is necessary to have a software driver and modem circuitry included with the codec chip. The little riser board is placed directly into the motherboard, bypassing the PCI bus. As the name implies, it is referred to as a riser board because it is mounted on top of the motherboard rather than sitting flat against it.

The AMR was a low-cost approach for manufacturers to incorporate cutting-edge audio and modem design into their products. There were no built-in audio or modem functions on motherboards. At the same time, many original equipment manufacturers did not want to adopt the AMR because of its limited capabilities, such as the lack of plug-n-play.

Sound cards were later integrated into the motherboard, although modems continued to rely on PCI expansion slots. After that, technology took a new direction. This modem card can be used in conjunction with an HDMR slot manufactured by Asrock, which uses HDMR to provide its modem functionality.

Motherboard’s power and other contacts:

These issues are addressed by audio interfaces, which have mostly displaced sound cards. The same name even refers referred to them by some people. Sound cards differ from external peripherals because they are inserted inside the computer casing. These connectors allow the card to interface with the motherboard’s power and other contacts, which will be dropped into the slot and secured with a screwdriver once the backplate is attached.

While many people refer to the sound card as an audio interface, they are two separate components. However, an external audio interface is a particular piece of hardware connected to the host device by cable rather than an integrated sound card.

It doesn’t plug and play, it doesn’t support hardware acceleration, and it doesn’t have a PCI slot. Technically, it has been replaced by the ACR and Intel’s proprietary communications and networking riser. The riser technology, on the other hand, failed to take off. Audio and network interfaces were incorporated into motherboards, although modems remained as PCI cards.

Input and output of audio signals from and to a computer are controlled by programs running on a sound card, often known as an audio card. There are many types of external audio interfaces referred to as sound cards. Additionally, plug-in card-like components can build sound capabilities onto the motherboard. The sound card is still a common term for the built-in audio system. As an alternative to the older S/PDIF connection method, video cards with HDMI output now include sound processing technology to output audio and visuals.

Communication and Network Riser is the name given to a specification that allows Audio, USB, and LAN interfaces on core logic chipsets. On February 7, 2000, Intel debuted CNR slot technology. The AMR slot was primarily developed by well-known hardware and software companies. This motherboard has a “CNR SLOT” labelled, which is an example of a CNR slot.

However, Intel’s AMR slot, which was intended to provide a simple, standard manner of integrating modem and audio operations into finished systems at a cheap cost, was largely neglected by OEM system designers. PCI slots superseded AMR slots. Hence most chipset designers and system builders preferred to include an extra PCI port rather than an AMR slot of dubious utility. As a result, the AMR slot did not have Plug and Played functionality.

Type A and Type B are the two potential varieties of 30-pin CNR slots, each with a unique set of pin assignments. Type A and Type B are the two conceivable types of 30-pin CNR slots. CNR Type A features an 8-pin PHY interface, whereas Type B has a 17-pin MII bus LAN interface, the most common configuration. Signals from USB and AC’97 are both recognized and supported. In the same way, as AMR was removed from the motherboard, analogue I/O components might be removed from the motherboard to save money for the manufacturer. Manufacturers are permitted to certify the CNR card, but not their entire motherboards that contain only the CNR card.

Is a Sound Card Necessary For Audio?

A USB speaker with an integrated DAC can be used in place of a sound card to provide audio output. Valid cards, whether inbuilt, installed as an expansion or external, are the best way to produce sound on a device. The user can only hear an audio signal if it can be converted from a digital signal to an analogue signal by the computer’s sound card, which performs this conversion.

Manufacturers can now create a single card that can serve as either a Modem or an Audio/Modem riser using this new AMR chip, released on September 8th, 1998. Since the motherboard may be produced using this specification for less money, the system has more slots available for other plug-in peripherals of the same standard. AMR was never widely accepted due to factors such as the incorporation of modems and sound cards onto motherboards, the increase in the number of users that use broadband and technological advancements such as PCIe.

What is the function of a sound card?

Sound is an analogue signal that is produced by vibration. It is impossible to accurately capture a sound wave’s waveform using a digital password.

A different waveform variation represents each note on the musical scale.

To understand what we perceive as sound, we first need to understand how our ears translate analogue vibrations into electrical signals that our brains can understand.